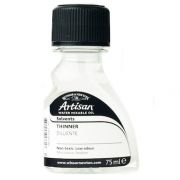 Water is used for thinning Artisan colours instead of the solvents used with conventional oils.  Water should be added gradually, a small amount at a time and mixed well on the palette.  If too much water is used or added too quickly, some colours may ‘foam' with air bubbles.  This can be reduced or avoided by using Artisan Thinner or combining the water with an Artisan medium.

As water is added, some colours will lighten in tone.  The colour will return to its original hue as the water evaporates.  This colour change is reduced by the use of Artisan mediums in addition to water or by using Artisan Thinner instead.

Although water is suitable as a diluent for the colour, its speedy evaporation can make the colour thicken upon the palette much quicker than conventional oil colour would when used with turpentine.

To help with this issue Winsor & Newton have developed a Thinner to dilute Artisan colours. This can be used instead of water or combined with it.  It also provides a more oily consistency which is preferred by some painters and as it is not forming an emulsion with the colour there is less colour change than there would be when using water.

Thinner may be combined with Artisan oils to make your own mediums.

Important: Beware of over thinning.  Water and Thinner thin the colour by diluting the modified linseed oil.  If too much is used, there will be insufficient oil remaining to bind the pigment.  The paint surface will be susceptible to damage and appear dull and matt.  For fluid, transparent colour with an even sheen, dilute with Artisan Painting Medium, Artisan Fast Drying Medium, Artisan Linseed Oil, Artisan Safflower Oil or Artisan Stand Oil as well as water or Thinner. Artisan can however, be thinned right down with water or Thinner for staining a canvas in the early stages of a painting.