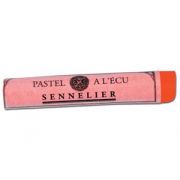 Sennelier Pastels A L'Ecu Large Size.  Available in 62 shades.  Each pastel is the approximate equivalent of 5 standard pastels.

It took over three years, at the turn of the 20th Century, to formulate the Sennelier range of Extra Soft Pastels “à l’écu” and thus to create one of the largest chromatic range of pastels. Throughout the century, this range of tones has evolved, but the heart of its making remains unchanged.

The high quality composition of “à l’écu” pastels is the result of a perfect balance between binder and pigment. For gradient shades, increasing amounts of mineral fines are added, ultimately tending towards white. The exceptional brightness is the result of the pigment and of the natural mineral fines discovered by Sennelier in 1905 and that have been used ever since.

The manufacturing process of the Sennelier cylindrical pastel does not compress the paste and the pastel dries naturally in open air. The life span of a piece of work is guaranteed by the quality of the pastel, but also by the quality of the substrate. If a lot of overlapping is performed, it is preferable to fix between layers. Avoid, however, fixing the final layer too heavily, as the original vibration of tones will be lost

Due to inherent differences in computer monitors, colours displayed below may not accurately represent the actual colour.